The Urban Space around Haga Station 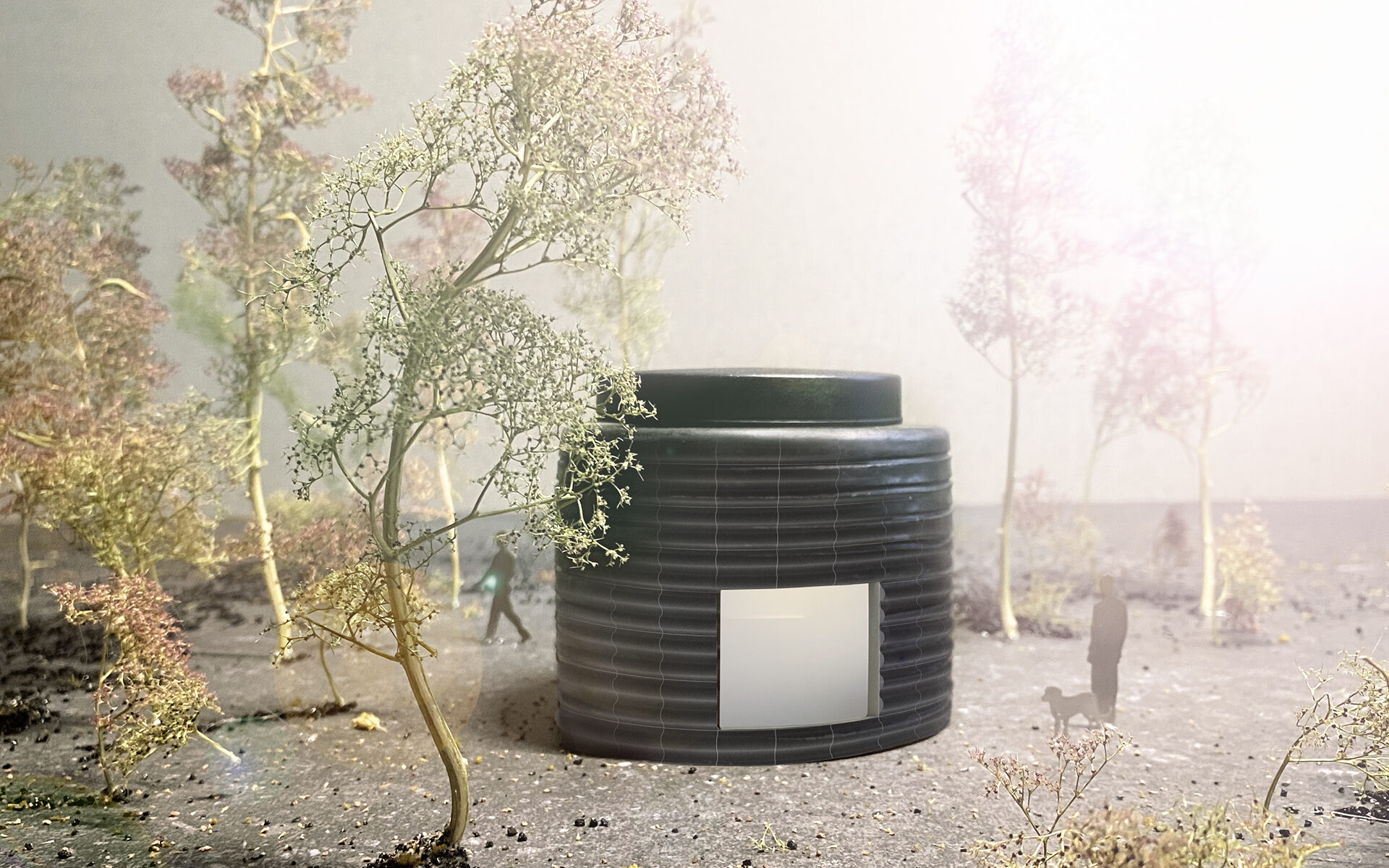 Here you can see all the concept proposals that were submitted for the public art for the urban space around Haga Station. The winning proposal is Nina Canell’s Pitch Drop Pavilion (700 years).

The concept proposals were the result of an international selective tendering process in which artists from anywhere in the world could apply to develop public art projects for the urban spaces around Haga and Korsvägen Stations. All of the art in the West Link project is to be produced through the West Link’s comprehensive art program, Chronotopia, whose themes relate to different aspects of time and space.

After an initial selection of artists, a total of three were invited to develop concept proposals for Haga: Nina Canell, Lap-See Lam, and Maddie Leach. Nina Canell was selected the winner of the tender competition.

A jury of experts has chosen the winning proposal. The jury comprised representatives from the City’s Cultural Affairs Administration, the Traffic and Public Transport Authority, the Parks and Landscape Administration, Västfastigheter (public property developer and manager for the Västra Götaland region), the Public Art Agency Sweden, and outside art experts.

They have evaluated the proposals based on criteria such as how the projects incorporate the Chronotopia theme, their visionary strength, how they relate to the urban space and develop the city’s public art, and their sustainability and choice of materials. Among the requirements for the public art projects were that they should be unique, independent, and endure for at least fifty years.

The winning proposal is to be installed in 2026, when the rest of the West Link project is completed. The project schedule may be adjusted during the course of construction.

In a green area adjacent to Haga Station, a sculpture is to be placed in the form of a cylindrical pavilion into which one can peek through a window on one side. Inside the pavilion is a concrete funnel filled with pitch.

Pitch is a fossil material that is derived from decayed plants, resin, coal, or petroleum and has traditionally been used to seal boat hulls, among other things. It was once an important export good for Sweden going back to the Viking era. Pitch is an incredibly slow-flowing material, with a viscosity at least a billion times higher than that of water.

Through the funnel inside the pavilion, a drop of pitch will slowly form and eventually fall. If you’re lucky, you might be there to witness that rare moment. The exterior of the pavilion is clad with wave-formed cast basalt tiles whose light-reflecting and iridescent surface invites associations with mineral history and geology. The inside is made of pale concrete, and a ring of skylights floods the interior with natural light. This light creates a strong contrast with the pitch-black drop, heightening its visibility as the focus of the view through the pavilion’s window.

This work of art is inspired by scientific experiments with pitch drops, the longest-running of which has been going since 1927. In that experiment, a drop has fallen about every ninth year, but as a result of a series of chance occurrences, no one has actually witnessed the fall of a drop in many years. When the seventh drop fell in 1988, for example, the head of the experiment was out getting coffee. In 2000, a camera was installed, but it still failed to record the pitch drop due to technical problems.

It remains to be seen whether anyone will see the drop fall in Haga. The installation will remain untouched for at least 100 years, but there will be enough pitch to last as much as 700. In this way, Pitch Drop Pavilion (700 years) can be seen as a dizzying study of waiting and time. The work invites reflection on different concepts of time and biological and geological rhythms, and simultaneously visualizes the creep of time and challenges the often stressful relationship to time that otherwise characterizes train stations.

From the jury’s statement:

“With her transformative sculpture, Nina Canell succeeds in charging Haga with a heightened energy of expectation that can be experienced bodily as well as spiritually. Pitch Drop Pavilion (700 years) is a long-scale artwork that challenges our expectations of permanence and the ostensible limitations of public art—a kind of game with time that adds additional layers to the urban realm. The work is imbued with the tacit faith that there will still be a city, and people, and a society in 700 years. It is a bright vision of the future that is worth highlighting in our time.”

Nina Canell (born in 1979 in Växjö) is an artist based in Berlin. She earned her degree in art from the Dun Laoghaire Institute of Art, Design and Technology in Dublin and has had several solo shows at museums around the world. In her work, she focuses on the way different materials are transformed in time and space through sculptures and installations.

Lap-See Lam’s proposal is a public art project for the Rosenlund Canal that is made up of several parts and based on the story of the Floating Restaurant Sea Palace, a Gothenburg ship popularly known as “the Dragon Boat.” The boat was built in Shanghai according to imperial drawings and transported to Gothenburg in 1991. After several fruitless attempts to establish a Chinese restaurant on board, the vessel was abandoned at Drömmarnas kaj (the “Pier of Dreams”), where it became the object of speculation and myth.

One part of Lam’s concept proposal is a LED light art installation in which the words “Vi ses på Drömmarnas kaj” (“See you on the Pier of Dreams”) are mounted to the underside of a new pedestrian bridge across the Rosenlund Canal. In this way, the Dragon Boat can be seen as a reflection in the water.

The boat’s glittering scales can also be seen in a monumental mobile sculpture placed alongside the canal, and on the other side of the water we see the forms of three fabric-draped chairs cast in concrete. Once there, we can sit down on one of the chairs and experience a sound artwork that tells an imaginative tale of the Dragon Boat’s wandering journey that spans across the past, present, and future.

Explores the mythologizing of China

In this piece, Lap-See Lam digs where she stands, basing her work on her own family history. The mythologizing of the Dragon Boat encompasses several historical trails that can be reflected in the area around Haga. For example, it connects with Gothenburg’s early ties to China through the East India Company and the eighteenth century’s obsession with all things Chinese, and how that history continues to influence Swedes’ view of China to this day.

It is also a story about the emergence of the Chinese restaurant in the West, where generations of migrants have recreated and marketed an imagined image of China—one that has also become, with its distinctive interior design aesthetic, a bit of cultural heritage in its own right.

Lap-See Lam (born in 1990 in Stockholm) is an artist based in Stockholm. By moving freely among different media and materials, she creates total works of art that explore Swedish-Chinese cultural history.

The focus of Maddie Leach’s proposal is slow-growing lichens. Lichens are known as “pioneer species” that can grow on essentially anything that stands still long enough, sometimes as slowly as a just a few millimeters per year. In this way, they can re-establish life and vegetation on disturbed sites that have been impacted by human activity.

Leach proposes to install special growing sites for lichens on the roofs of three of the station buildings, which are to be covered in newly mined diabase from the West Link project’s tunnel construction. On these rocks, colonies of lichens will develop over the course of 50–100 years. From the ground, the lichens can be viewed through public telescopes. Placed alongside the telescopes are benches made of wood milled from the trees that need to be felled in conjunction with the station construction. On these benches, we can sit and ”be a lichen”, temporarily at least, by listening to a special soundtrack that envelops us in a choir of amplified vibrations from lichens growing in the area.

Through the slow, careful growth of lichens, Livskraftig introduces other ways of thinking about time and speed. Species that are otherwise hardly noticeable in the urban environment are carefully highlighted and processes we might otherwise overlook are made visible.

Maddie Leach (born in 1970 in New Zealand) is an artist living in Gothenburg. Her work is characterized by a conceptual versatility that embraces a variety of processes as well as chance. Leach often works with words and print media, video, and performative action.