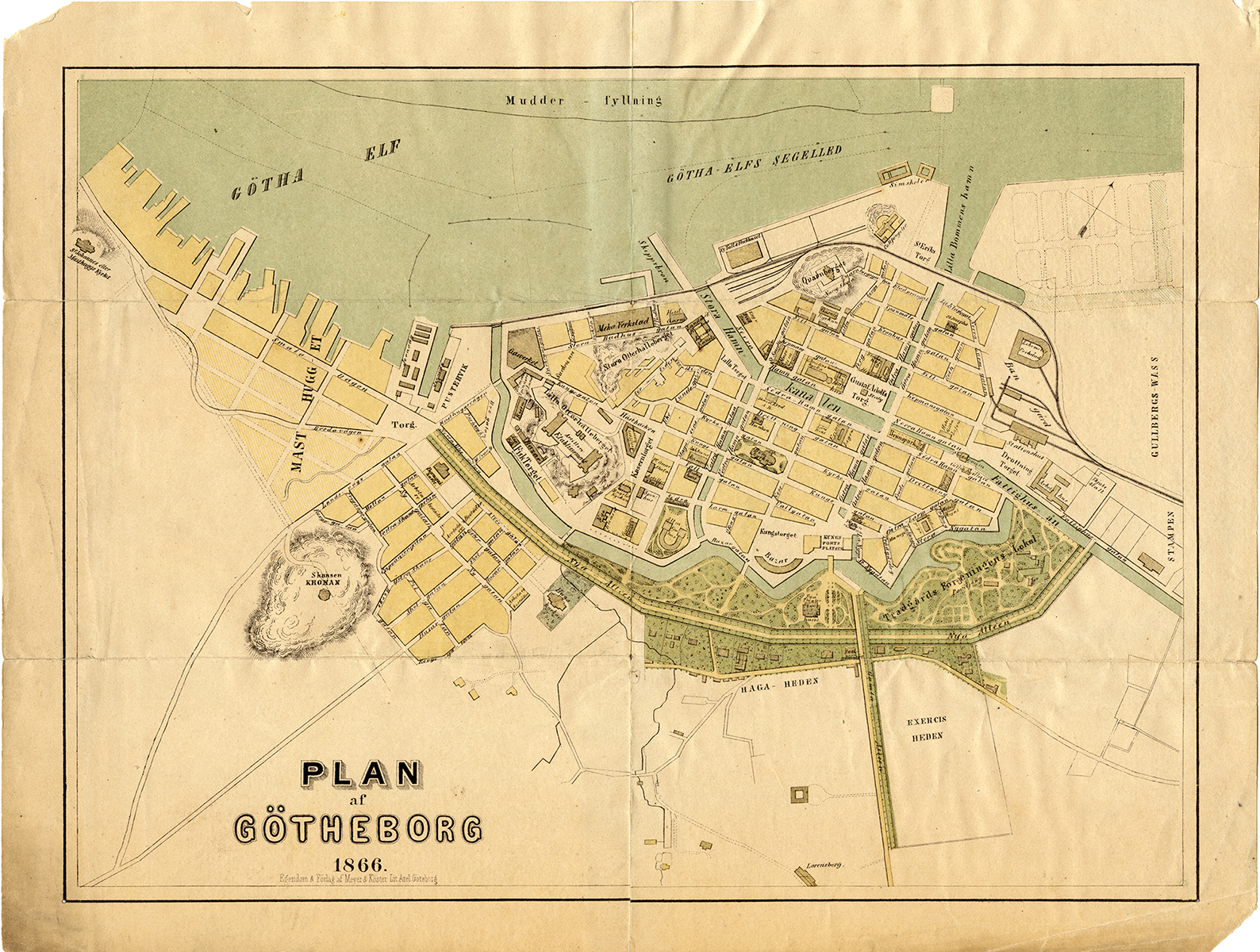 A map depicting Gothenburg in the year of 1866. Image source: Gothenburg Museum.

The West Link is one of the largest infrastructure and urban development projects in Gothenburg’s long history. One aspect of the project is the creation of a series of public artworks for the city, with the vision of incorporating artists into the process of shaping new public spaces for everyone in Gothenburg to share.

Read this page in Swedish

About The West Link

The population of Gothenburg and the Västra Götaland region is projected to grow by almost one-third by 2035. That means that more people are going to have to get where they need to go without a car. The West Link is one of the essential investments that make that possible. The West Link ties together the region and the city through an underground railway link beneath central Gothenburg, where three new train stations (Central, Haga, and Korsvägen) relieve congestion at the current Central Station. The new station designs and the development of the surrounding urban spaces are going to shape people’s everyday lives for a long time into the future.

The construction project kicked off in 2018, and the first trains are expected to start rolling through the tunnel in 2026.

Art in the West Link

In conjunction with the construction of the West Link project, a series of public artworks will be created both for the platform areas of the underground stations and for the surrounding environments above ground. The new art is expected to contribute to the design of the public realm and the urban milieu around the stations.

The West Link’s comprehensive art programme, Chronotopia, was developed in 2016 by the Swedish Transport Administration, the Public Art Agency Sweden, Västtrafik (the public transport agency for the Västra Götaland region), the Västra Götaland region’s art department, and the City of Gothenburg’s Traffic and Public Transport Authority and Cultural Affairs Administration. The art programme presents the overall artistic vision for the West Link project. All of the art produced within the framework for the West Link project is based on this programme.

The name Chronotopia comes from the Greek Χρόνος (chrónos), meaning time, and τόπος (tópos), meaning place. The theme of the Chronotopia programme is to use site-specific artistic exploration to investigate our contemporary world, the potential of the past, and possible stories of the future. The city of Gothenburg is both a place and an era in time, or rather many different parallel spaces and times. A cross-fertilization among these spaces and eras can strengthen and deepen the city’s ethical and existential dimensions.

The aim of the art programme is to provide artists with generous room for interpretation, to make possible a variety of different working processes, and to ensure a high level of artistic integrity.

The places that are encompassed by the art programme are Haga Station, Korsvägen Station, Central Station, and the Olskroken infrastructure area.

Read the Chronotopia Art Program in its entirety

Funding Provided by the One Percent Rule

The works of public art created for the West Link project are funded through the One Percent Rule at national, regional, and municipal levels. The One Percent Rule requires that one percent of spending on new construction, renovations, and additions is devoted to public art.

Art for the Station Platform Areas

It is the national government that is responsible for procuring the art for the underground station platform areas and for the Olskroken infrastructure area. The Swedish Transport Administration is the project owner and Public Art Agency Sweden the process leader for these artworks.

Two international art competitions were being held in order to generate proposals for the artistic design of the West Link’s underground station platforms. In 2016 and 2017, the winning entries were announced:

Note: It has been determined that the funding plan for Eternal Employment violates a paragraph of the established capital funding arrangement, and thus the work cannot be executed. The Swedish Transport Administration and Public Art Agency Sweden are taking responsibility for finding a solution to the dilemma.

Art for the Station Buildings

Note: It has been determined that the funding plan for Eternal Employment violates a paragraph of the established capital funding arrangement, and thus the work cannot be executed. The Swedish Transport Administration and Public Art Agency Sweden are taking responsibility for finding a solution to the dilemma.

The tendering process for the art for Haga Station is being planned now. For Central Station, the Västra Götaland region has no ownership in the property, but rather is a tenant of space owned by the national government.

Art for the Urban Spaces Around the Stations

The City of Gothenburg is responsible for procuring the public art for the urban environment surrounding Haga Station, Korsvägen Station, and Central Station. The city’s Traffic and Public Transport Authority is the project owner, and Gothenburg Art of the city’s Cultural Affairs Administration is the process leader.

In the fall of 2021, the Traffic and Public Transport Authority and Gothenburg Art invited artists and artist groups to take part in an international selective tendering for the creation of public art for the urban spaces around Haga and Korsvägen Stations. Below you can see the winning proposals as well as all six of the concept proposals that were developed through the tender.

The public artworks are to be installed in 2026, when the West Link project as a whole is completed. The project schedule may be adjusted during the course of construction.

Later there will be a second tender for the urban space around Central Station.

Public Art During the Construction of the West Link

Public Art in During the Construction of the West Link is a project that aims to create valuable experiences of art for those who live in, work in, and visit the city during the time the West Link is being built.

The project is a collaboration between the City of Gothenburg’s Cultural Affairs Administration and Traffic and Public Transport Authority and is made up of two parts. The first is a collaboration with GIBCA, the Gothenburg International Biennial for Contemporary Art, which is producing a series of soundworks linked to Haga, Central, and Korsvägen Stations.

The second part of the art project for the construction period is a collaboration with an art platform called Skogen (“The Forest”), which is undertaking a number of artistic studies of the West Link through at study group, called Chronotopia. These studies will form an archive of knowledge and material that will be continually made available to the public through various artworks and in-depth conversations.

The project Public Art During the Construction of the West Link extends from 2019 through 2022.