The Urban Space around Korsvägen Station 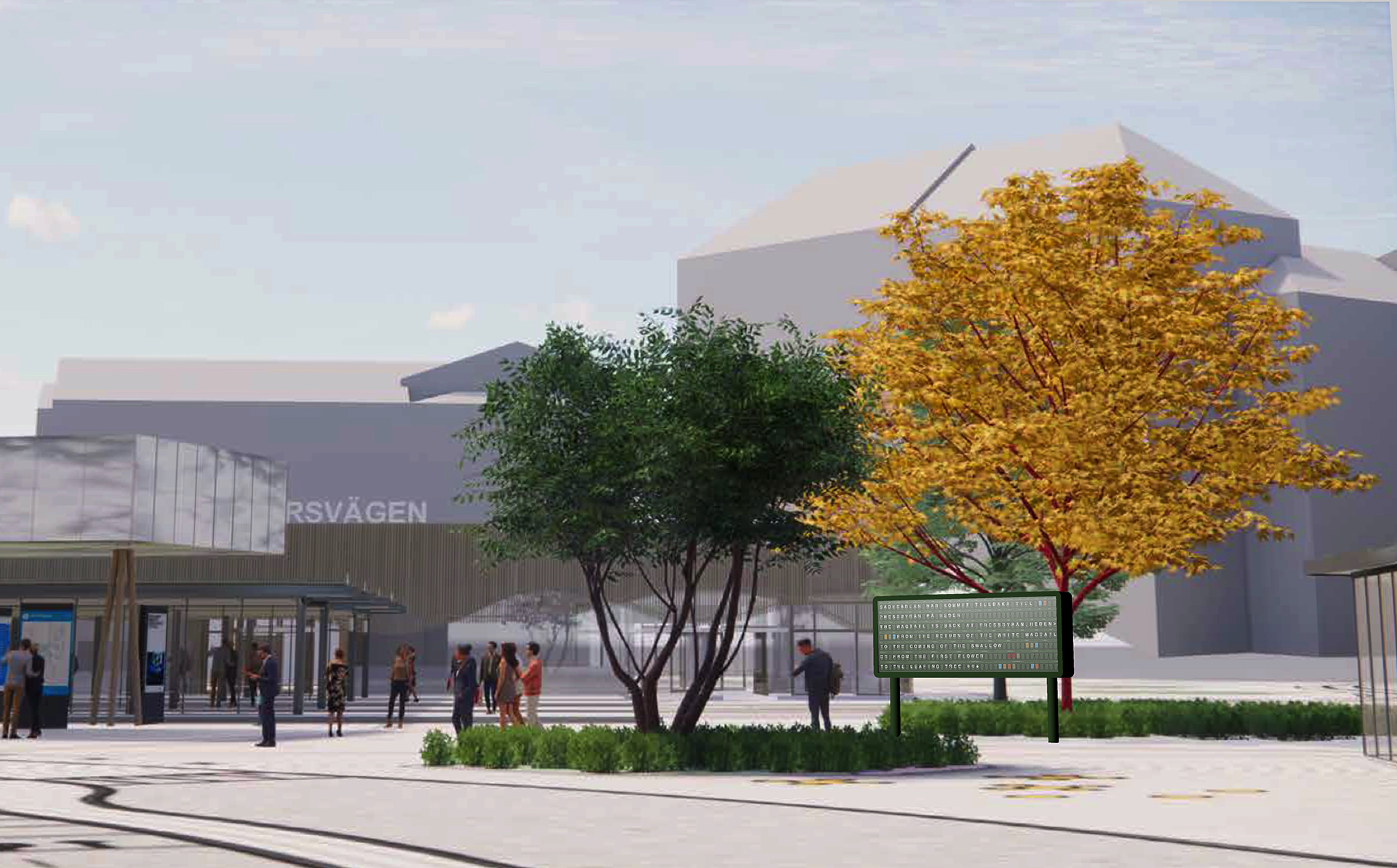 Ruth Ewan's proposal "Everything Must Change" was selected the winner of the tender competition. Image by Petter Yxell.

Here you can see all the concept proposals that were submitted for the public art for the urban space around Korsvägen Station. The winning proposal is Ruth Ewan’s Everything Must Change.

The concept proposals were the result of an international selective tendering process in which artists from anywhere in the world could apply to develop public art projects for the urban spaces around Haga and Korsvägen Stations. All of the art in the West Link project is to be produced through the West Link’s comprehensive art program, Chronotopia, whose themes relate to different aspects of time and space.

After an initial selection of artists, a total of three were invited to develop concept proposals for Korsvägen: Ruth Ewan, Nina Beier, and Claudia Comte. Ruth Ewan was selected the winner of the tender competition.

A jury of experts has chosen the winning proposal. The jury comprised representatives from the City’s Cultural Affairs Administration, the Traffic and Public Transport Authority, the Parks and Landscape Administration, Västfastigheter (public property developer and manager for the Västra Götaland region), the Public Art Agency Sweden, and outside art experts.

They have evaluated the proposals based on criteria such as how the projects incorporate the Chronotopia theme, their visionary strength, how they relate to the urban space and develop the city’s public art, and their sustainability and choice of materials. Among the requirements for the public art projects were that they should be unique, independent, and endure for at least fifty years.

The winning proposal is to be installed in 2026, when the rest of the West Link project is completed. The project schedule may be adjusted during the course of construction.

Ruth Ewan, ”Everything Must Change”

The Scottish artist Ruth Ewan won the tender for Korsvägen with a project titled Everything Must Change.

For the urban space around Korsvägen Station, Ewan will create an alternative “clock” in the form of an analog split-flap display board of the kind that was once ubiquitous at airports and train stations. This “clock” is inspired by phenology and by Carl Linnaeus’s floral calendar, which was based on the cycles of nature, in contrast to our linear way of viewing time.

The split-flap board will display time-specific observations submitted by Gothenburg residents, alongside quotes gathered from historic documents. As a collection of texts they will reflect the shifts in nature throughout day and seasons in the local urban environment.

Collecting observations from the people of Gothenburg

Observations will be collected from the general public for a period of one year, during which time the city’s inhabitants will be encouraged to observe and register events in the natural world around them. These may be observations of flowers that bloom at dinner time, a neighbor’s oak beginning to drop its leaves in September, sunlight and shadows falling across a kitchen table, or a baby waking up at a certain time every night.

The observations will be gathered through workshops with selected groups, such as children and young people, but also through social media by inviting the general public to contribute. It will be possible to submit contributions in multiple different languages.

In this way, the messages displayed on the “clock” will be both universal and personal, a surprising and contrast-filled stream of words that conduct a dialogue among all the people who pass through the place every day.

The passage of time: past, present, and future

The split-flap display board changes its message several times a day, and the content of those messages follows the cyclical changes in the natural world based on the subjective experiences of Gothenburg residents. The board has the ability to show quotations from thousands of individuals and historical voices linked to the city. Thus, it will provide a pluralistic and poetic representation of time passing through nature.

As global warming shifts the cycles of nature, this artwork may perhaps also provide a kind of starting point that shows what will soon be an antiquated chronology in the wake of climate change.

A couple of smaller “clocks” are to be located in the area around Korsvägen, perhaps at tram and bus stops.

From the jury’s statement:

“’Everything Must Change’ is a generous proposal that, with its roots in citizen science, strives for a far-reaching pluralism. At the same time, the artist is able to condense this pluralism with a profound simplicity expressed through the text-based sculpture. It relies on the logic of poetry to transform the personal as well as the universal relationship to time and place into a great work of art. Ruth Ewan’s ’Everything Must Change’ is straightforward and relates to the pace of the place—it wants to be a partner in dialogue with the many people who pass through Korsvägen, whether they do so every day or only once. This work of art is directed outward toward all of us.”

Ruth Ewan (born 1980 in Scotland) is an artist based in Glasgow. She has a degree in painting from Edinburgh College of Art, and her work has been shown in many major institutions and biennials around the world. Ewan’s art relies on dialogue-based processes and a research-based practice. She often works with public space and questions of how social movements take form and spread from individuals to society.

Nina Beier’s proposal is a work of art in which a group of reclaimed bronze equestrian statues are slowly overgrown and swallowed up by a manicured yew hedge.

The six equestrian statues are to be acquired on the second-hand market and then placed close together in a group. A hedge is to be planted around the statues and carefully trimmed into a rectangular block as it grows. At first the vegetation covers only the base of the sculptures up to the horses’ knees. But as the years and decades pass, the hedge will slowly overtake the horses and eventually their riders. After twenty-five years they will be completely engulfed within a green, verdant cube.

The proposal can be seen as a comment on traditional hierarchies within art and the public realm. For a long time, men on horses were a popular representation of influence and power. Originally these were monuments to specific men, but many of them have since been transformed into symbols of a by-gone era.

Placed together in an intimate group, they lose their individuality and become something more abstract: an anonymous cavalry riding to face an invisible enemy. When the hedge has taken over fully, the bronze statues will have been transformed into a story, a memory, or a myth.

Nina Beier (born in 1975 in Århus, Denmark) is an artist based in Copenhagen and Berlin. In her art she often makes still lifes in the form of performative sculptures and static assemblages.

Claudia Comte’s proposal, Cactus, Coral and Leaf, aims to enhance our connection to the natural landscape of the surrounding world through a group of monumental marble sculptures that reintroduce nature into the urban realm.

The three sculptures have organic forms that suggest a cactus, a branch of coral, and a leaf. They are made of polished white marble and meant to be placed outside of one of the entrances to the new travel center at Korsvägen.

This work plays with our perception of scale by enlarging details from the plant world that we otherwise overlook. It is a monument to these overlooked forms of life, raising questions about the critical situations confronting the earth’s natural habitats, the ongoing crisis of global warming, and the threat to biodiversity.

The eclectic group of sculptures possesses varied qualities and brings to the fore the wonders to be found in the trees, under the sea, and in the desert. The rounded forms of the leaf remind us of the wind in the forest, and the delicate skeleton of the coral suggests the movement of waves, while the cactus embodies a calm, enduring resistance.

Claudia Comte (born 1983 in Switzerland) is an artist based in Basel. Her work often reveals an interest in ecology, the preservation of nature, and the memories embodied in different materials and the relationship between the hand and various technologies.